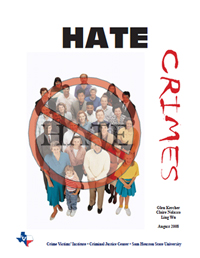 Violent crime vicitmization is an ongoing concern for many citizens. This can stem from news accounts or the reports of acquaintances about things that have happened to them. Much is known about interpersonal violence and its effect on victims. In the past two decades violent crimes motivated by bias toward a victim because of that person's race, disability, religion, national origin or ancestry, age, gender, or sexual orientation have received increasing attention.